The Lion, the Camel, the Jackal and the Crow

"Always be on guard when you are in the company of wicked people".

There was once a jungle that was ruled by a lion called Madotkata, who had a leopard, a jackal and a crow at his service, along with other animals. 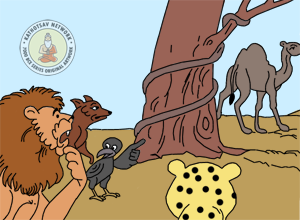 As they did regularly, they were wandering about the jungle one day, when the lion saw a camel at a distance. This camel had separated from its caravan and was feeding itself on the green grass of the jungle.

The lion took a fancy on this animal that he had not seen before, "Let us go and ask this extraordinary animal, where he comes from."

The crow, who flies to far-off places was aware and replied, "Master, it is called a camel and this animal lives in villages. The flesh of this animal tastes good, let us kill it and eat it."

But the lion disagreed, "He does not belong to the jungle, so he is our guest. I will not kill it. Please go and assure him that no harm will be done, and bring him to me". 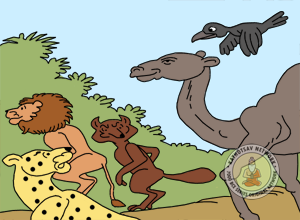 As per the lion's instruction, they went to the camel and assured him that they were to bring it to the lion. They won its confidence, and they brought the camel to the lion.

The camel stood before the lion and bowed. He also narrated how he had gotten separated from his caravan and how he had reached the jungle.

On hearing this, the lion said, "Oh Camel, if you return to the village you will be made a beast to carry burden again. Stay in the jungle under my kingdom instead. You can feast on the abundant green grass of the jungle without any fear."

The camel accepted the offer, and they began to live together in peace. 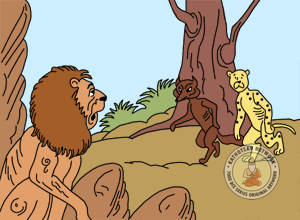 Later one day, the lion got severely wounded in a fight with a mad elephant. Such were his injuries that he could not take a few steps, let alone go out of his for hunting.

Due to lack of food, the lion became weaker. The animals who served him were also starving since they were dependent on the lion for their food.

When the lion could not bear anymore, he called them and said, "Go and find any animal that I can prey upon even in my weak condition. This way I can provide food for you, and also for myself."

All the animals wandered about the jungle without any success to find such an animal. On their way back, the jackal had a plan.

He said to the crow, "There is no point wandering about the jungle when the food is right in front of us. The camel can provide us with the food for all of us for a long time."

The crow replied, "Indeed, what you say is correct. But the master has assured the camel of his safety under his rule. He will refuse to kill him."

The jackal said, "Leave that to me. I will influence the master in a manner that he will agree to feast on the camel. You wait till I return after a discussion with the lion". 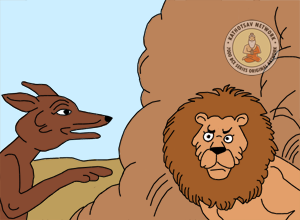 The jackal met the lion and said, "Master, we have been looking all around the jungle but could not find an animal for you. All of us have not had food for so long that we can hardly walk properly. Under this circumstance, if you agree to kill the camel, his flesh can provide food for all of us".

The lion disagreed, "Shame on you! How can I kill the camel when he has my assurance that his life will be safe under my kingdom. It is a sin to think likewise."


The jackal continued, "What good are we, if we cannot be of our master's service in his time of need. Please kill one of us for yourself, and the others to save the rest of us from dying of hunger."

The lion failed to justify the jackal and said, "Please do what you think would be in the best for all of us." 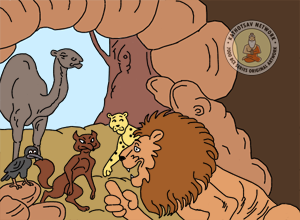 After this, the jackal returned to the other animals and declared, "Our master is sick and weak. If something happened to him, there would not be anyone to protect us. We have failed to get any animal after wandering throughout the jungle. The only way now to repay our debts to our master would be to offer ourselves to him. This way the rest of us would be saved from dying of hunger too."

As planned, all of them stood before the lion and bowed. They informed the lion that they did not succeed to find any animal for their food.

The crow said, "Master, we could not find an appropriate animal for your food. So, I offer myself. Please eat me to save yourself from hunger."

The jackal interrupted, "You are too small to provide flesh for the master. Even if he agrees your offer, it will not be enough for his survival. Indeed, you have proven your devotion and by offering yourself, you have already freed yourself from the debts of the master."

He turned to the lion and said, "Please accept my offer instead." 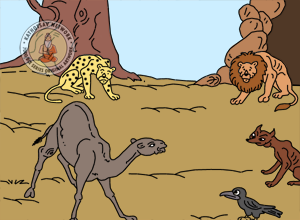 The jackal stood humbly before the lion, "Master, please eat me to save yourself from hunger. If you accept my sacrifice, I will be honoured with a place in heaven".

On hearing this, the lion shook his head in refusal. This way, the other animals started offering themselves, but the lion kept refusing to accept their offer.

The camel who was observing all this thought, "All of them speak beautifully about offering themselves, but the master refuses to kill any of them. I shall seek to impress the master in a similar fashion."

Thinking such, the camel said to the other animals, "You have offered yourself, but the master cannot eat you because all of you are carnivores and belong to the same category as the lion himself. Stand by, for I shall offer myself".

With this, the camel came forward and bowed before the lion. 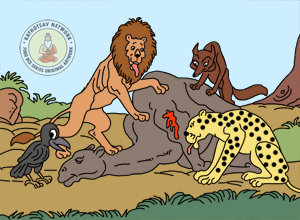 He said, "Master, you need not kill any of these animals. Please eat me instead. I offer myself in return to your debts. I shall find my way to the heaven, if you may please accept my offer".

No sooner had he made the offer, the other animals cheered. Having already been influenced by the jackal, the lion jumped on him. He was killed, and eaten by all the animals together.

The wise indeed say:
Always be on guard when you are in the company of wicked people. Do not be taken in by their sweet words.