The Bird with Two Heads

Once upon a time, there lived a great bird named Bharunda, on the banks of a lake. 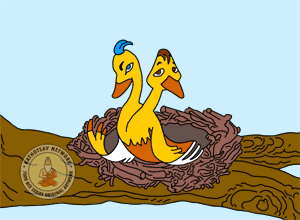 It was strange because he had two necks with two heads, but shared the common body. One day, as the bird was wandering, it found a delicious looking red-golden fruit.

One of the heads mumbled, "Oh, what a delicious looking fruit. I am lucky to have found it. I am sure the fruit is sent from heavens only for me". On saying so, it started eating the fruit with utmost pleasure. While eating, it kept on praising how it was the most delicious fruit he had ever eaten.

Hearing and seeing all this, the other head requested, "Oh dear, please also allow me to taste the fruit that you are praising with all your heart".

Few days later, as they were wandering the second head found some fruits. 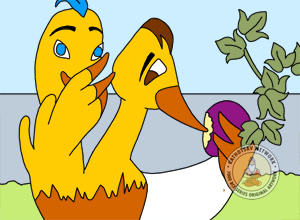 The fruits were from a poisonous tree. He declared to the first head, "You are a deceitful person. The other day you had insulted me by not sharing the delicious fruit. Now I am going to eat this fruit and avenge your insult".

The first head pleaded, "Please don't eat this fruit, it is a poisonous one. We share the same stomach. If you eat it, we will both suffer"

Mocking at the first head, the second head replied, "Shut up! Since I am the one who found this fruit in the first place, I have the right to eat it myself".

Knowing what would happen, the first head began to cry. The second head ate the poisonous fruit without bothering the first head's requests. As a consequence of this action, as soon as the poison reached the stomach, the bird severely suffered.