The King and the Foolish Monkey

"Beware of a foolish friend. He can cause you more harm than your enemy".

Once there was a king, who had a pet monkey.

This monkey was a fool, but was treated royally and moved freely in the king's palace. 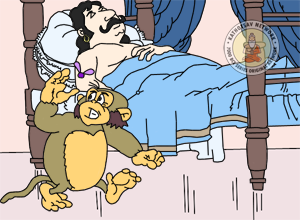 He was also allowed to enter the king's personal rooms that were forbidden even for the confidential servants.

One afternoon, the king was asleep, while the monkey kept a watch.

All of a sudden, a fly came in the room and sat on the king's chest.

The monkey swayed her away, but the fly would only go away for some time and return on the king's chest again. 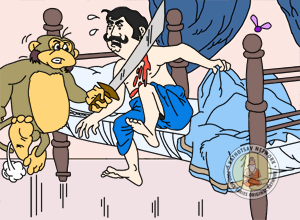 The monkey got very angry and excited. The foolish monkey started chasing the fly with a sword.

As the fly sat on the king's chest again, the monkey hit the fly with all his might. The fly flew away unharmed, but the king was severely wounded.


The wise indeed say:
Beware of a foolish friend. He can cause you more harm than your enemy.