The Cunning Hare and the Witless Lion

"Deceive the wicked and destroy them without mercy".

There was once a powerful lion called Bhasuraka who ruled the jungle. He was merciless and killed other animals indiscriminately. 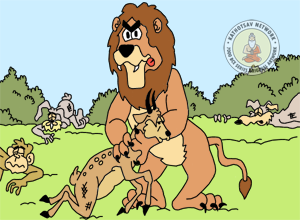 One day, all the animals went together to the lion to surrender. They said, "O Master, you kill many of us every day without necessity. One animal a day is enough to satisfy your hunger. Please come to an understanding. Starting from today, we promise to offer one amongst us to you every day. In this way, you will not have to hunt and many of our lives will be spared."

Hearing this, the lion agreed, "It is true, but I warn you, if I do not receive an animal every day, I shall proceed to kill every one of you." 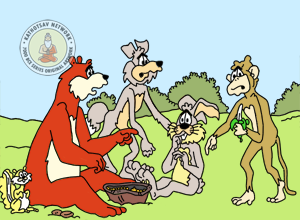 In accordance to the understanding, the animals drew lots, and the unlucky animal that got chosen was sent to the lion. The others roamed about the jungle without any fear of being attacked by the lion.

One day, a hare was chosen. Unwilling to become the lion's food, he started for the lion's den. He walked as slowly as possible.

On the way, the hare came across a well. It peeked down from the edge and when it saw it's own reflection, he hit upon a plan.

He thought, "I have a plan that will not fail. I will deceive the lion and lead him to his death".


On this, the hare walked towards the lion's den, even slower than before. 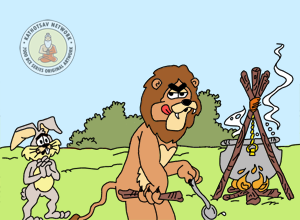 Finally, when the hare reached the lion's den, the lion was hungry and furious. He had been waiting for his food for the entire day.

He licked his lips in hunger, and thought of killing as many animals the next morning as he could. While he was thinking so, the hare approached the lion and humbly bowed.

The furious lion began to shout, "You are a miserable animal. You are not only late, but also very small. I will first kill you and satisfy my hunger, and then kill all the rest of the animals for doing this to me".

The hare replied humbly, "O Master, It is neither my fault nor the fault of any other animal. Please allow me to explain before you kill me".

The lion roared, "Be quick. Give me an explanation fast for I am very hungry". 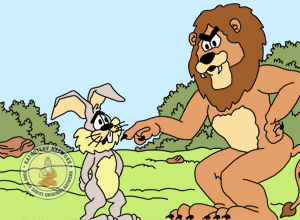 The hare started, "Today it was my turn to be offered to you. But because I am small and would not be able to satisfy your hunger, four more hares were sent along with me".

On the way, we met a lion who came out of his den and roared, and got ready to eat us. We pleaded to him that we were going to fulfil our master's hunger as promised every day.

He roared, "I am the master of this jungle. From today, you will offer yourselves to me and none other. The other lion is an imposter. If not, let him accept my challenge to a trial of strength. Whoever proves to be stronger, will rule the jungle. I will allow one of you hares to carry this message to him, and hold the rest of you as hostages."

The hare humbly continued, "This is the reason only I, among the five of us, am here. I have arrived late for the same reason. Please take action that you think will be best".


On hearing this, the lion grew even more furious. He roared, "Take me to this pretender at once. I will destroy him. Only after that will my anger be quenched."

The hare quickly replied, "O master, I must warn you that this lion stays inside a very strong den. It is difficult to attack someone who takes shelter in a stronghold. Furthermore, I have seen him myself, he seemed very strong". 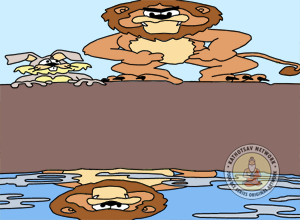 The lion roared, "That is not your concern. Take me to him at once".

The hare then led the lion to the well he had come across on his way.

On reaching, the hare pointed towards the well and said to the lion, "O master, we have no doubt on your powers. The lion has hidden himself inside that stronghold".

The witless lion stood at the edge of the well, and saw his own reflection in the water below. He thought it to be the lion who had challenged him. 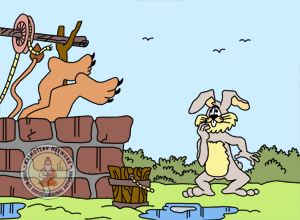 He roared at his reflection with all might and fury. The roar sounded back, re-echoed from the well.

On hearing this, the lion got furious and leapt inside the well to attack his own reflection. He got drowned.

The hare was very happy that his plan had worked successfully. He danced his way back to the other animals and told them what had happened.

The other animals gave the hare a hero's welcome and praised his cleverness. From then onwards, the animals roamed about the jungle happily.

The wise indeed say:
Deceive the wicked and destroy them without mercy.