"Do not be taken in by the sweet words of a swindler".

Once upon a time, there was a sage called Deva Sharma who lived in a temple in the outskirts of a town. 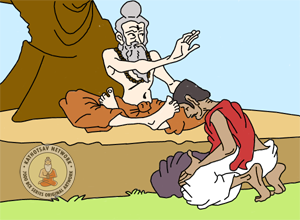 He was widely known and respected. People would visit him, and offer him with gifts, food, money and garments to seek his blessings. The gifts that he did not need for himself, he would sell off, and got rich on the proceeds.

And by nature, he trusted nobody.

He never trusted anybody. So, he kept all his money in a bag which he carried under his arm all the time. He would not part with the bag for a single moment.

One day, a swindler came across the sage, and he became sure that the bag this holy man was so possessive of, must surely contain a lot of treasure.


He planned on stealing the bag from the sage, but could not think of a way to do so. He thought, "I cannot make a hole in the temple wall, or jump over the high gates. But I can charm him with sweet words to accept me as his disciple." 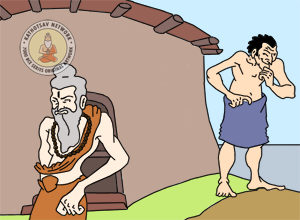 He wondered, "If I can stay with him as a disciple, I can win his confidence. When I get an opportunity, I will rob him, and leave this place."

Having planned so, the swindler approached the holy man with reverence, "Om Namah Shivaya! (I bow before Lord Shiva, the God of Destruction)"

With these words, he fell on the sage's feet and said, "O Guruji, Please guide me to the right path of life. I am fed-up with life, and want to seek peace."

The sage kindly replied, "My son, I will surely guide you. You are blessed because you have come to me to seek peace at this young age". 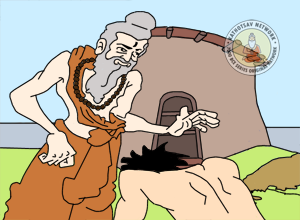 This was the opportunity the swindler was seeking, and he at once touched the feet of the sage for blessings, "O Guruji, please accept me as your disciple. I will do whatever you ask me to do."

The sage accepted the swindler as his disciple, but only on a condition. He said, "A holy man as me is recommended to spend the night alone without company. This helps me to meditate also. So, you will not be allowed to enter the temple at night. You will sleep in a hut at the gate of the temple."

The swindler agreed, "I shall willingly serve your wishes in every way that you ask me to."

In the evening, the sage initiated the rituals and formally took the swindler as his disciple.

The swindler in return proved himself an obedient disciple. He massaged his hands and feet, washed his feet, and helped him with all the rituals along with cleaning the temple. Although the sage was happy with his disciple, the swindler could not gain enough confidence for the sage to part with his bag when he was around.


As days passed by, the swindler started getting frustrated, "He does not trust me enough to leave the bag with me. I can gain access to the bag if I kill him with a knife or feed him with poison."

When he was thinking all this, the swindler saw a young boy visit the sage. He was the son of one of the sage's followers. He invited the sage, "O Guruji, I have come here personally to invite you to our house for the ceremony of sacred thread. Please accept the invitation to sanctify the ceremony with your kind presence." 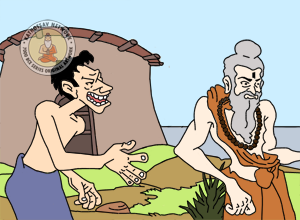 The sage accepted the invitation, and after some time started off for the town with the swindler. On the way, they came across a river, where the sage thought of relieving himself. He folded the bagful of money in his robe. He asked his disciple to look after it, "My child, Look after the robe until I return".

This was the opportunity that the swindler was seeking all the while. As soon as the sage went behind the bushes, the swindler ran away with the bagful of money.

When the sage returned, he did not find the disciple around but found his robe lying on the ground. Shocked and anxious, he peered inside only to find his bag of money was gone. 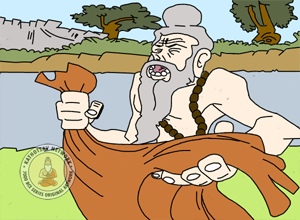 At once he knew what had happened, and began to shout, "Oh. Where are you, you rascal. You have robbed me."

The sage then started trailing the swindler's footsteps, but he reached town. He knew he will not be able to catch hold of him. He stayed the night in town to return empty-handed to his temple next morning.


The wise indeed say:
Do not be taken in by the sweet words of a swindler.