The Fall and Rise of a Merchant

"One should treat one and all, even the lowest, with respect".

In a city called Vardhamana, lived a very efficient and prosperous merchant. 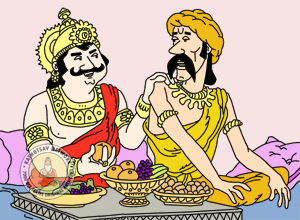 The king was aware of his abilities, and therefore made him the administrator of the kingdom.

With his efficient and intelligent ways, he kept common man very happy, and at the same time he impressed the king on the other side. Such a person, who can keep everybody happy, is rarely found.

Later, there came a time that the merchant's daughter was getting married. He arranged for a lavish reception.

The merchant not only invited the king and the queen, who obliged by attending, but he also invited the entire royal household and all respected people of the kingdom. 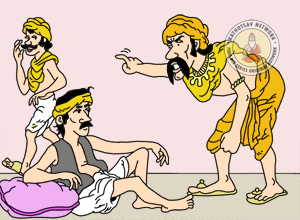 During the reception, he ensured to provide his guests with the best of treatments. He gave out gifts to guests to show them respect for attending to his invitation.

A servant of the royal household, who used to sweep the palace, was not invited but attended the reception.

He took a seat which was reserved for royal nobles, not meant for common invitees.

This made the merchant very angry. He caught him by the neck and ordered his servants to have him thrown out.


The royal servant felt very insulted, and could not sleep all night. He thought, "If I can have the king to disfavour this merchant, I will have my revenge. But what can I, a common fellow, do to harm a powerful person as him". Thinking such, he suddenly had a plan. 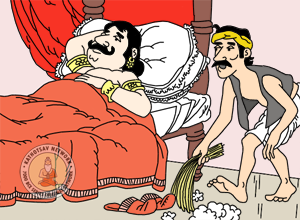 Several days later, the servant was sweeping the floor near the king's bed early in the morning. He observed that that the king was still in bed, half awake. The servant started mumbling, "Good heavens! The merchant has become so carefree now that he dared to embrace the queen!"

When the king heard this lying in his bed, he jumped up and asked the servant, "Is it true? Have you seen the merchant embrace my queen yourself?"

The servant at once fell at the king's feet, "O Master, I was gambling all night. I feel drowsy for I didn't sleep last night. I don't know what I have been mumbling, but I said anything improper, please forgive me."

The king spoke no more, but the servant knew he had sowed the seed of distrust. The king thought, "It can be true! The servant moves about the palace freely, and so does the merchant. It is possible that the servant has seen something." 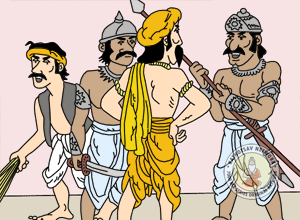 The king was troubled with jealousy. From that day onwards, he withdrew his favours from the merchant and even forbade him to enter the palace.

One day, when the merchant was entering the gateway to the palace, he was stopped by the guards. The merchant was surprised due to this sudden change in the king's attitude.

The servant was nearby, and mocking shouted at the guards, "Ho Guards! That merchant is favoured by the king. He is a powerful person. He can have people arrested or released or even thrown out, just like he had me thrown out of his daughter's reception. Beware, for you may suffer the same fate."

On hearing this, the merchant understood that the servant has caused all this trouble somehow. He felt dejected, and returned home upset over the incident. 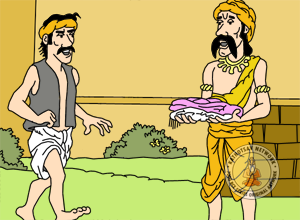 He gave everything a second thought, and then he invited the royal servant to his house. He treated the servant with utmost respect, and flattered him with gifts and garments. He said kindly, "O friend, that day I did not have you thrown out due to anger, but it was improper of you to occupy the seat reserved for the royal nobles. They felt insulted, and out of compulsion I had to throw you out. Please forgive me."

The servant was already flattered with all the gifts, and he was full of joy, "Sir, I forgive you. You have not only expressed your regrets, but also honoured me with utmost respect".

He ensured the merchant, "I will prove you how clever I am. I will have the king favourable towards you, like he was before". The servant went back home. 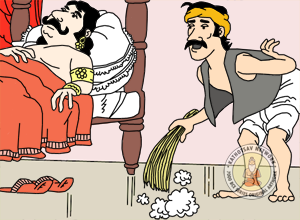 Early next morning, when he started sweeping the floors of the palace, he waited till when the king was lying half-awake.

When the opportunity came, he started sweeping around his bed and started mumbling, "Our king is crazy, he eats cucumber in the lavatory!"

On hearing this, the king was taken aback. He got up angrily and shouted at the servant, "What nonsense do you talk about? Had you not been by royal servant, I would have punished you dearly. Have you ever seen me doing such thing yourself?"

Once again the servant fell on his knees and prayed, "O Master, please forgive me if I said something improper. I was gambling all last night and didn't sleep. I feel drowsy and I don't know what I have been mumbling." 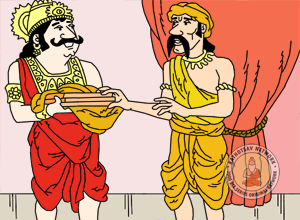 He wondered, "After all he has been so efficient in the whole administrative system, that without him it has become slack."

The wise indeed say:
One should treat one and all, even the lowest, with respect.