Tales of Panchatantra: Wisdom of the Ages

Most translated, most adapted literary book in the world.

The Panchatantra is a compilation of inter-woven series of tales in prose and poetry, mostly animal fables. It was compiled in Sanskrit (Hindu) and Pali (Bhuddhist). The compilation, attributed to Pandit Vishnu Sharma, is considered by most scholars to be dated around 3rd century BCE, and to be based on older oral civilization. Through cross-border mutations, adaptations and translations, the Panchatantra remains the most popular work of literature, especially amongst storytellers.

Tales of this ancient Indian work, the original texts of which is now long lost, portray the origins of the subcontinent's language and primitive lifestyle - apart from its objectives, according to its own narrative, to illustrate the primary Hindu principles of nïti - the wise conduct of life.

The Panchatantra consists of 5 parts, apart from a brief introductory narrative. Each of the five parts revolve around a frame story, which further contain "emboxed" stories, sometime three to four levels deep. These emboxed stories snap from each other, unexpectedly and irregularly at times, to sustain attention:
Enjoy the Short stories of Panchatantra, in English, with pictures and morals » 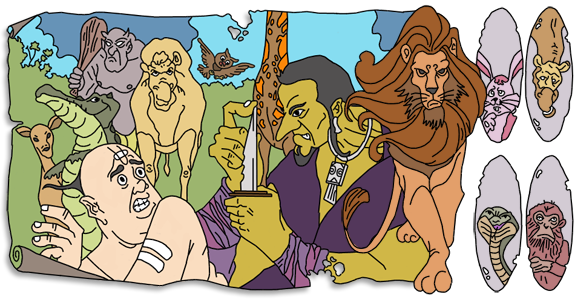 Once upon a time, sitting by the fireside, man told his first story, and built the foundations of his own rule over his world. Stories gave the world shape. They established orders and challenged them, showed man the road to the future and helped him unravel the labyrinths of the past.

Through stories, man trapped the world around him, and bent it to his will. Man knew ... stories were what inspired him, made him stronger, better, wiser. Stories were what made man realize that there was more to life than mere existence. There was something to look up to, something to aim for, somewhere to go ...

From original Sanskrit manuscripts to short stories in English, our efforts are dedicated to 'The Panchatantra', the oldest collection of Indian fables surviving:
Read the Complete works of Panchatantra, translated in English, with pictures »

The Panchatantra was composed, in Sanskrit language, in ancient times. This book of five volumes, has travelled and been translated all over the world, primarily because of the witty moral values of the short stories and elegant representation of framed-stories. Despite the fact that the original work is long lost, the texts in Sanskrit scriptures are available here:
Explore the Moral Short-Stories from the Panchatantra, in Sanskrit language »


India, with its ancient traditions, is one of the oldest, wisest and most enlightened nations in the world. Almost everyone in modern educated world is aware of the 'Upanishads', 'Vedas', and even 'Yoga'. There is no doubt that Ancient India has exercised great intellectual life, and has dazzled with fabulous antiquity, and with its literature.

The Panchatantra is a unique contribution of Ancient India to the world, particularly to the world literature, that has equally delighted the young and the old, educated and uneducated, rich and poor, high and low - for over two thousand years. It has triumphed over the greatest obstacles of language, custom and religion, and made an unparallel progress from its native land to all the civilized parts of the globe - as it continues to delight everyone to this very day.

This Indian collection of fables, reveals the basic knowledge of wisdom that makes one's life "richer, happier, and fuller". Because of its elegant style in which it packages the wisdom of the ages, it has the most profound influence on the world literature - amongst all works of Indian literature.


Panchatantra has served as a source, directly or indirectly, for many works of modern literature, which can be traced to Geoffrey Chaucer, John Gower, Giovanni Boccaccio and even William Shakespeare's works. In 1800 AD, Jonathan Scott epitomized the Bengal manuscript as 'Tales, Anecdotes and Letters'. Most people in modern world may not have heard of the Panchatantra. But anyone with any claim to literary education would be familiar to commonly used titles like 'Fables of Bidpai' or the 'Tales of Kalila and Dimna' - which are merely translations or adaptations of Panchatantra. The fact that even before 1888, there were at least 20 English translations of this great Eastern Classic - makes one wonder how widely circulated this book was. As a matter of fact, no other book, other than the Bible, have ever enjoyed such intensive worldwide circulation.

Although the original texts of the Panchatantra are long lost, it survived through numerous commentaries and recensions. The most notable of them being the Hitopadesha by Narayana, Durgasimha's Kannada translation of 1031 AD, Purnabhadra's recension of 1199 AD, and Franklin Edgerton's 1924 reconstruction of the Sanskrit text of the original Panchatantra.

It is evident from history that Panchatantra had an unprecedented impact on early scholars, as it travelled to Persia, Arabia, Greece and Europe. During the Sassanid reign of Khosru I Anushiravan, Burzoy, the court physician to the Emperor of Iran, translated the Panchatantra into Pahalvi (Middle Persian) language, as early as 570 AD. His work was further translated by Buda Abdul Inu, a priest, into Syriac 'Kalilag and Damnag'. The title of this work was derived from Karataka and Damanaka, two jackals in a frame story of the Panchatantra. The manuscript of this work survives, and remains preserved. Burzoy's work was also translated by Rudaki into Persian verses.

This Panchatantra's Pahlavi translation by Burzoy was further used by Abdullah Ibn al-Muqaffa for Arabic 'Kalilah wa Dimna' around 750 AD. Around 11th century AD, Simeon, son of Seth, translated a version of the Panchatantra into Greek and Rabbi Joel translated a version of the Panchatantra into Hebrew. During 1263-1278 AD, it was further translated into Latin as 'Liber Kelilae et Dimnae, Directorium vitae humanae', which was printed in 1480, and around 1483 AD, Anthonius Von Pforr translated into German, and titled his work as 'Das buch der byspel der alten wysen', which was further used for translations into Danish, Icelandic, and Dutch languages.

Being the most translated, and most adapted literary book in the world, over thousands of years, this 'Gem of Indian literature' remains the 'crown jewel of World literature':
Enjoy the Short stories of Panchatantra, in English, with pictures and morals »